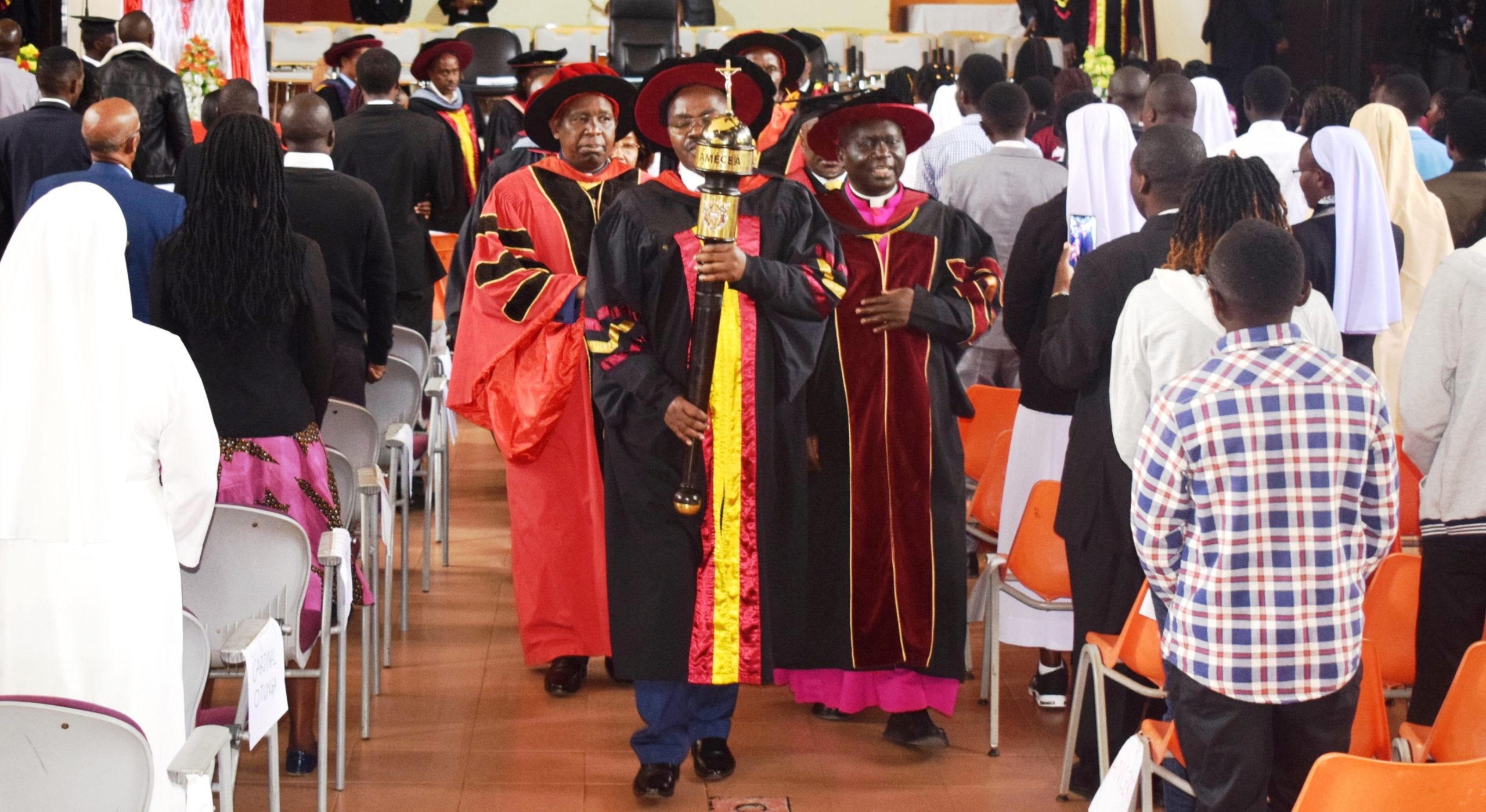 The Celebration kicked off with Mass led by Most Rev. Phillip Subira Anyolo, the Archbishop of Nairobi who was also the Chief Guest at the Academic Ceremony thereafter. Archbishop Anyolo is the Pro-Chancellor of the University and a member of the Board of Trustees.
In his homily, Archbishop Anyolo warned the young students that the face of evil in the current world is ‘frighteningly ordinary’, camouflaged in things and acts that seem so normal and almost inconsequential. “It comes in ordinary things, what we are studying; everything available to us, our politics, in our relations with others and it is frighteningly ordinary.”
He however express his trust that the students were in safe hands and had the advantage of being in a Catholic University where they will be guided and helped to discern what is best for their lives.
In the Mass, the Archbishop also confirmed 13 candidates. He encouraged them and all in attendance that while we live under the threat of evil from Satan, God through the Holy Spirit had bestowed on us the gifts of the Holy Spirit to be able to counter and overcome evil.
At the Mass, three new lecturers from the Faculty of Theology undertook their profession of Faith vowing to uphold and be faithful to the Scripture, the teachings of the church, and all that it teaches through the Magisterium. The three are Rev. Dr. Stephen Mbugua Karanja, Rev. Dr. Paul Ngoku and Rev. Dr. John Bosco Asiimwe. They took the vow and their documents were witnessed by Archbishop Anyolo.
Archbishop Anyolo in his speech at the convocation ceremony urged the students to look up to the right role models, people who have earned their place in society due to their good deeds and way of life and not those who have earned their wealth and fame through unscrupulous means.
The Vice-Chancellor, Very Rev. Prof. Stephen Mbugua in his remarks reminded all that the University continues to offer a strong, value-based education. “The University aims at inculcating values that are universal to all its students and for them to acquire a Catholic identity.”
He further encouraged the students to take part in extra-curricular activities such as the spiritual movements that would greatly shape their character and avoid the negative distractions of Social Media that presents to them a warped identity.
The VC also requested staff to be models of values and all that is good for the lives of the young students.
In her speech at the Convocation Ceremony, Mrs. Prof. Rachel Gesami, the DVC Academic Affairs and Research urged the staff and older students to be a good example to the new students who joined the institution on September 6.
At the Mass, 33 students were awarded with the Cardinal Otunga Scholarship. The University runs an annual fundraising programme in honour of the Servant of God, the late Maurice Cardinal Otunga who by his death was one of the founding Fathers of the University and Archbishop of the Archdiocese of Nairobi. This year, the Cardinal Otunga memorial Mass, Lecture and Fundraising will be held on November 11, 2022 at Langata Campus.
The Catholic University has entered its 38th Academic year since its founding in 1984 as the Catholic Higher Education Institute of Eastern Africa.